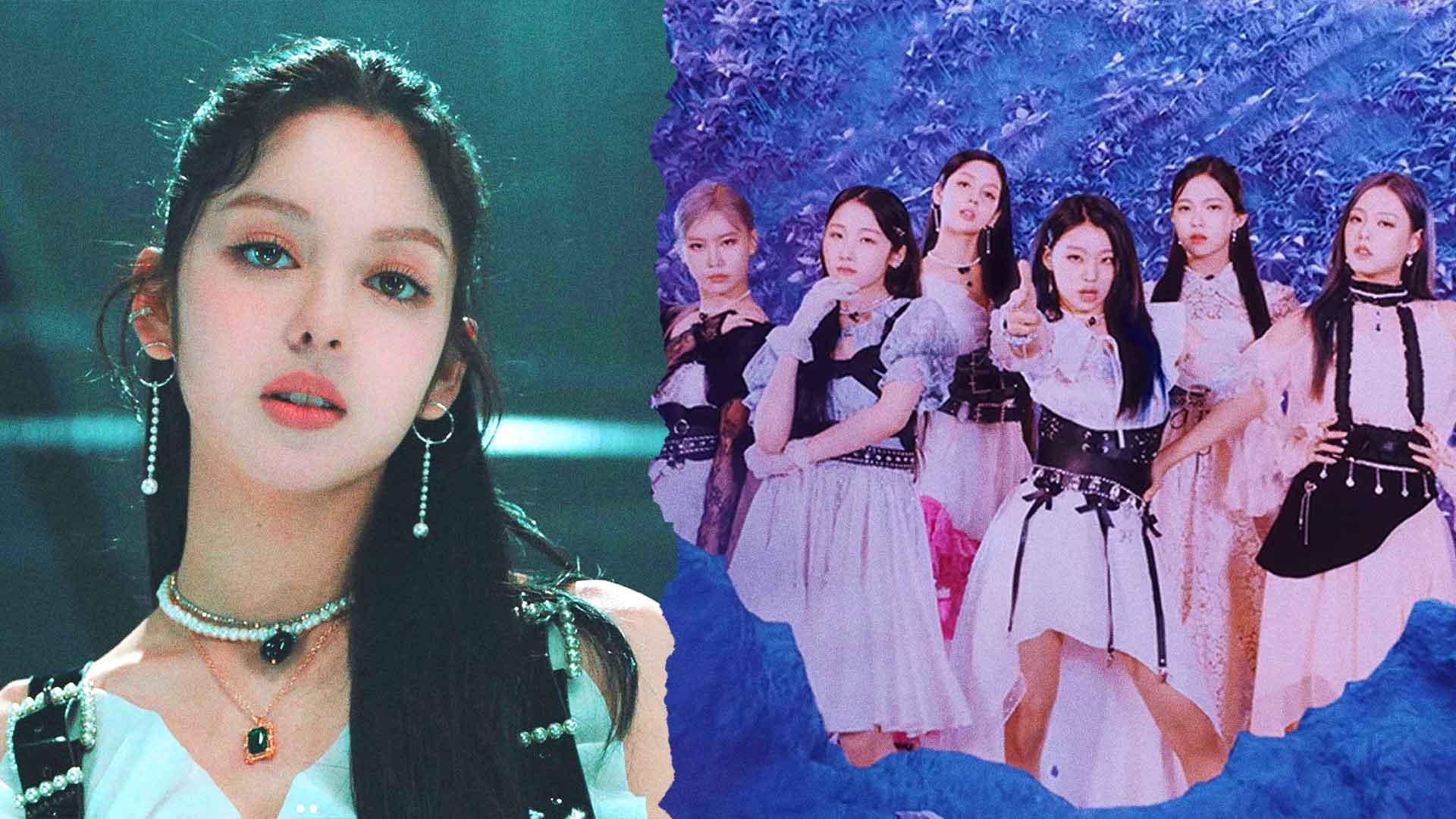 Fun fact: Chanty credits Belle Mariano and Charlie Dizon with introducing her to BTS and K-pop.

With how popular K-pop is in the country, it’s surprising then to see that there isn’t an abundance of Filipino idols making it big in K-pop as compared to say, Thailand. And with the relatively few Pinoy K-pop idols currently active, you wouldn’t necessarily call them A-list just yet. But that is all about to change. As the new girl group from MLD Entertainment and follow up to MOMOLAND, the announcement of LAPILLUS’ debut is bound to catch people’s attention.

But what is more striking is the fact that one of its members is Filipino. And it’s not just any teenage girl, it’s Star Magic actress Chantal Videla. From appearing on our screens on shows like Starla and ASAP, Chantal, or Chanty as she is now called, is jumping into the world of K-pop as an official idol. But while having a Pinoy idol has caught our attention, the group themselves has a story to tell and worth following, as seen in their debut song HIT YA!.

LAPILLUS is a six-member girl group with a girl-crush charm and concept. The group takes its name from the stone/jewel of the same name. The meaning behind it is to reflect the different colors that emanate from the group and inspire others to find their own color and shine it on the world. And they weren’t kidding when they said the group has different colors. The group is being promoted as a global girl group mainly because of how different each member is. There’s Chanty, the eldest of the group, who’s Filipino-Argentinian. Shana, the group leader, is Japanese, while Yue is Chinese-American. The remaining three members, Bessie, Seowon, and Haeun, are from Korea.

With a repertoire of different languages and cultures under their belt, the group is coming out of the gate with a global perspective. During an exclusive press conference with Philippine media, Chanty admitted that their different languages and cultures made it hard for them to get close at first. “I only had a faint understanding of the language through the K-dramas I watched.” But as time went on, they opened up to one another and now consider their different colors and styles as their main strength and charm.

Out of all the members, Chanty has been making the most noise thanks to her unique background. She’s a Filipina actress that is set to become a K-pop idol. It’s a rollercoaster career that few ever experience. But seeing her during the interview, she looked relatively the same as she was during her showbiz days, albeit with better singing and dancing skills, proficiency in Korean, and a better understanding of Korean culture.

She was also helping translate the questions from English to Korean for the other members to understand. Her road to becoming a K-pop idol began like how so many has, as a stan. And for this, she credits fellow actresses Belle Mariano and Charlie Dizon, who were also at one point training to be an idol, for introducing to K-pop, specifically BTS. And as they say, once you fall down the BTS rabbit hole, you never come out.

Her stage name of Chanty is actually just her nickname in real life. The staff at MLD decided to make it her name because it sounded cute and easier to pronounce. Chanty’s foray into becoming an idol came about thanks to a family friend. As she shared, she flew back to her home in Argentina during the pandemic. Her father had a friend who had connections with the higher ups at MLD Entertainment.

At the time, the president of MLD was looking for girls to audition to add to their next girl group. The friend showed him Chanty and she was soon getting a call that they wanted her in Korea to begin training immediately. She agreed and began her trainee arc in August 2021, a little over nine months. It was only when she arrived at MLD that they discovered that she was actually an actress.

If you knew Chanty during her ABS-CBN days, singing and dancing weren’t her known skills. Nor was she fluent in Korea aside from the small lines she remembers from K-dramas. So, the past nine months was filled with intensive training, the likes most idols-to-be go through, from dance lessons to cleaning the practice room and bathroom. Aside from that, she also took Korean lessons and had to adapt to the new culture she was living in, in particular the concept of seniority.

It’s no exaggeration to say that Chanty is set to become one of the highest profile Filipinos in K-pop. There’s no one like her in the industry. It’s a feeling Chanty admits is still trying to get used to. “Even until this moment, it still feels surreal to be here, to actually be called a K-pop idol. I still can’t wrap my head around it. But I am really grateful and blessed that I’ve been given this opportunity.”

In her eyes, the multilingual idol still has much to improve, but she hopes that in her new position, she will be able to inspire others to do the same given the wealth of talent among Filipinos. “I personally think that are so more capable Filipino girls that could probably be better at singing or dancing. With this little talent of mine, I’m grateful that I’m able to inspire, hopefully, the young girls out there to show their talent, be confident, and pursue their dreams.” Chanty hopes to open more doors for others to feel confident enough to do what they love. If Chanty can do it, so can you.

But despite how far she has and will go, Chanty is a regular 19-year-old Filipina at heart. She misses her family back home and craves the taste of pinakbet and laing that she had to give up for their diet. She considers Heart Evangelista her personal style star and looks to legends like Gary V and Regine Velasquez for inspiration. And, if you are wondering, she’s still close and keeps in contact with some of her Kapamilya friends like Charlie Dizon. Her Filipino side has even rubbed off on the members as Haeun learned that saying po is a sign of respect while Shana knows the word kawawa because Chanty said it once at a restaurant.

FROM GIRLS PLANET TO DEBUT

Chanty isn’t the only famous name in the group though. Shana may be familiar to K-pop fans as she competed in Girls Planet 999, making it all the way to the finals before sadly getting eliminated. And while she didn’t get to debut in Kep1er, she is now the leader of LAPILLUS. With over two and a half years as a trainee, it’s been a long time coming for Shana as the member with the longest training period.

But looking back on her time in the show, Shana feels that her debut came at a right time. “It would have been nice to debut then. But upon reflecting on myself, if I would debut with what I had then, I wouldn’t have enough confidence yet.” She spent the extra months of training and lessoned learned from Girls Planet to hone her skills further. Now, she feels more confident and happy to be debuting in LAPILLUS. “From the Shana you met in Girls Planet, I hope you support and appreciate the Shana that I am now.”

Another member who has also been attracting attention has been Haeun, the maknae of the group. At just 13 years old, she’s debuting at a very young age, young enough that it has even raised some eyebrows. But if you ask her, she doesn’t see her age as an issue. “Even though I’m 13 years old, I don’t feel like it.” In fact, she hopes that people won’t just see her for her age and instead take note of her aura and skills when performing. “In the future, I hope people not only focus on my age, but focuses on my talents.”

HIT YA! WITH THIS BOP

Thanks to their diverse background, LAPILLUS has caught the attention of quite a few fans. And thanks to their catchy debut single Hit Ya!, their debut is off to a strong start. The track and accompanying music video is a hard-hitting and powerful debut filled with confidence and bravado. But this is just the beginning of their journey and with a group composed of different personalities, who knows what else LAPILLUS will give.

The group, who consider BIGBANG’s G-Dragon and 2NE1 as some of their major musical inspirations, would love to collaborate with acts like Natti Natasha, Apink, and BTS in the future. Chanty in particular would love to work with Shakira if she had the opportunity to. Already, they have their eyes set on promoting in Korea and around the world. You can also expect further promotions with ABS CBN. LAPILLUS is also open to releasing songs in other languages, not just Korean. For now though, let’s savor their debut and see what these six girls have to offer to the world.

Continue Reading: WEi Delves Into The Stages Of Young Love With The Beginning Of Their LOVE Series