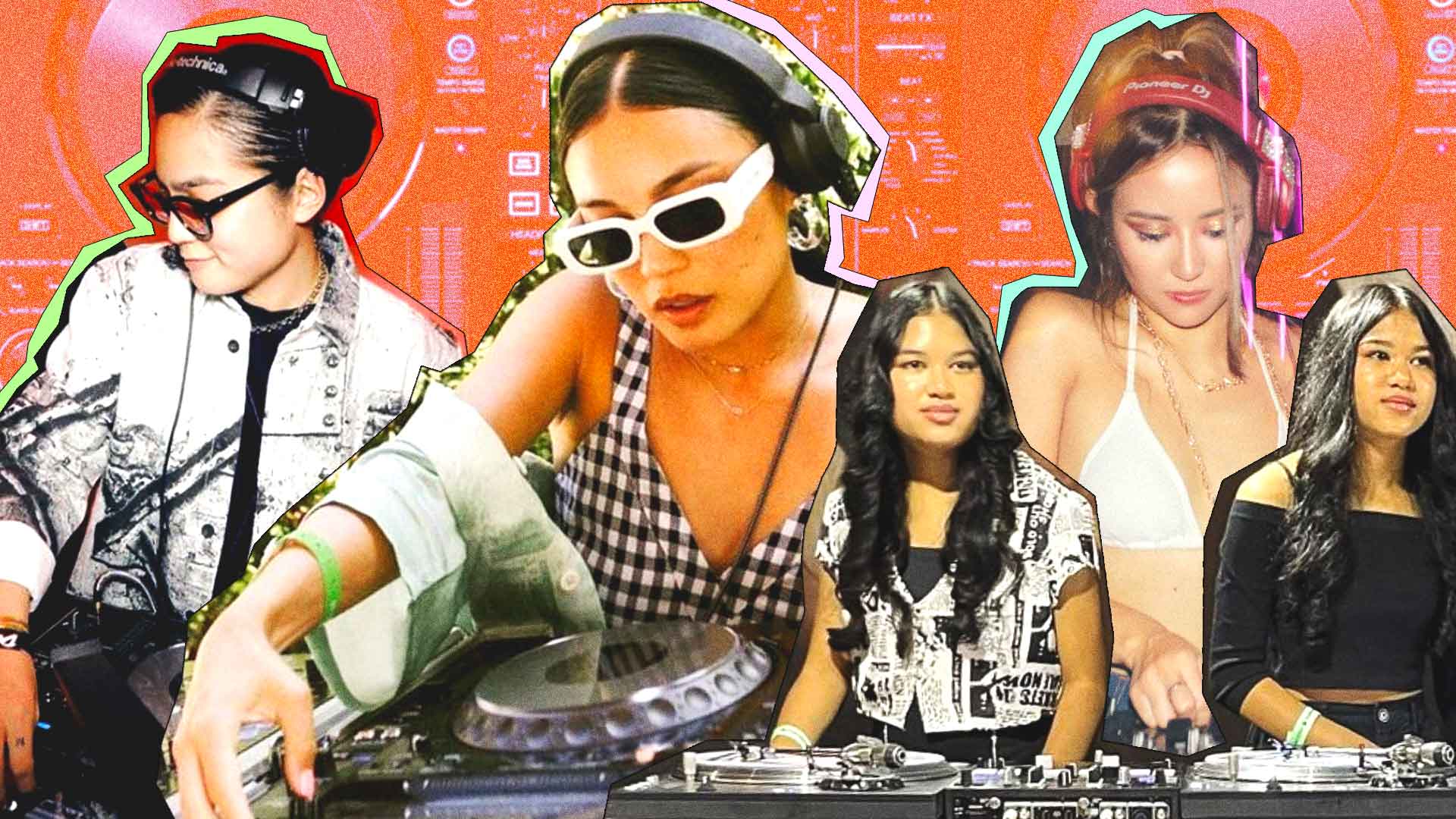 The Tables Have Turned: These Filipina DJs Are Killing The Game

Hey DJ, turn it up!
BY Lyn Alumno

These gorgeous, gorgeous girls will make you dance all night.

Who run the world? Girls. With new clubs being discovered and musicians transitioning back from Zoom listening parties to actual performances, there’s been a renaissance in Manila’s night life—especially for female DJs. They’re the life of the party, they’re well-dressed, and they’ve got the most fire playlists. From what once was an all boys club, the girls are now taking space.

The tables have finally turned and these Filipina DJs are not to be messed with, because they’re dominating the game with their bass-pumping tracks every step on the way.

From desk to deck, Patty Tiu used to have a 9-5 job working for PR in a DJ Studio. She then started spinning, joined competitions, and traveled to Southeast Asia. Aside from performing in local bars, Patty now owns a tattoo shop and an artist collective of new musicians, Thompson Collective.

Bea Alonsote, or more popularly known as Butta B, was already basking under the the spotlight early on as the “dancer” usually spotted at Black Market. But when she flipped the switch, it was her love for dance, music, and fashion that made her a stand out. She’s already toured with Jess Connelly and recently came from Europe after spinning in different clubs.

Marga Bermudez, or Margachi, is no stranger to the scene. She started out as an emcee, (formerly known as ”Marga on the Mic”) and also ventured further in the nightlife business. She was a part owner of a speakeasy in Poblacion and Siargao, and co-owns sunglasses brand, Ilaw Company. Marga is now part of the collective, Very Done.

Jia Meneses, known as Jia The Menace is the new kid on the block. She frequently plays at Boogie MNL, HQ Poblacion, and Black Market. Aside from DJ-ing, she also owns an architectural lab.

Hannah Clarissa Manzano, aka Hannah Ichiko, is a proud self-taught Filipina DJ. She initially worked as a flight attendant before going full time. She’s 1/2 of the duo ZKiTTLEZ and has opened and closed for international acts like Rich Brian, Tyga, and Kid Ink.

Alexandra Mascenon, known as DJ Alexandra, is one of the freshest Filipina DJs in Manila. She’s part of the Bad Decisions Smell Good crew and is also an interior designer. Together with fellow DJ Jia The Menace, they designed one of the prettiest studios in Makati, Facemelt.

DJ Katsy Lee is one of the OG DJs in the night life scene. She’s the youngest and first female champion of the Pioneer DJ Battle in 2012. She’s a faculty member of Bounce, a DJ & production school. The Filipina DJ has played in many cities in America, Europe, Middle East and acts like Kanye West, Steve Aoki, and Kendrick Lamar.

Twin DJ sensations Amira and Kayla were taught by their father at an early age. From small parties to becoming social media stars, the two have appeared in The Tonight Show, Wendy Williams, as well as on ESPN and Harlem Globetrotters. What on earth were we doing as 16-year-olds in the past?

DJ Bitesize is a Filipina DJ that hails from the Bay Area. She’s already won DJ contests and is currently a DJ instructor at School of Martial Arts and Hip-hop.

Micah Mahinay or DJ Noodz is a California-based Filipina DJ. Starting out in the fashion world, she merged it with her love for music and became well-known on social media. She’s toured with Kehlani and played in different music festivals.

Filipino-Irish Samantha Duenas, aka So Super Sam, has been immersed in music and performing arts since she was young. After getting her degree in economics, she became a dancer for stars like Miley Cyrus and Kelly Rowland. Aside from her career as a DJ, So Super Sam is also an on-air host.

A quiet but steady force in the scene, Mafia Escasinas will make you move to disco, R&B, hip-hop, house, and electro. Also 1/2 of The Grrs, Mafia has played in bars like Today x Future, Futurist, 2020 Bar, Kampai, Oto, and The Bowery. Aside from being a DJ, she’s a writer, producer, and social media manager.

Xtina Superstar is here to stay for the long haul. A DJ and stylist, she’s well-respected in the music and fashion communities. She’s part of the group Panty Monsters, a collective of DJs, fashion, art, and music enthusiasts. Xtina is a strong advocate for equality.

DJ Samantha Nicole helped put the Philippines in the map of nightlife destinations. She’s a resident DJ in XX XX, is the co-founder of Futurist, Unknwn MNL, CC: Concepts, and Manila Community Radio. One of the biggest puzzle pieces in the scene, Samantha’s also played in music festivals like Wonderfruit, and writes for MixMag Asia.

Cha Rapadas, known as Filtercha, is a Cebu-based DJ that’s been in the industry for over a decade. Veering away from the hustle and bustle of Manila, Filtercha moved to the islands, left her life as a keyboardist from an electro pop band, and further expanded her career as a DJ and producer.