One important aspect of Olivia Rodrigo’s Sour era is how she uses visuals to tell and enhance the story she is trying to tell in her debut album.

Related: These Creatives From Cotabato Did An Olivia Rodrigo-Inspired Shoot At 7-Eleven In 10 Minutes

Saying Olivia Rodrigo is having a hugely successful year is an understatement. With her knack for storytelling and the way her music speaks to the heart, the young artist is a musical force to be reckoned with.

But aside from the amazing music, which has been dissected and on repeat since its release, it’s time to draw attention to one of the underrated aspects of Sour: the way it conveys meaning through its aesthetic and visuals. Whether it’s through fashion, elements, and color schemes; Sour’s eye-catching visuals succeed in complementing every song, enhancing the necessary expression of feelings and emotions to accompany one’s listening experience.

When you listen to the surreal dreaminess of Deja Vu, don’t you think of strawberry ice cream, late-night car rides, Polaroids, and Olivia’s green dress? As a storyteller, the teenage singer utilizes imagery to its full poignant potential.

When you think of Sour, what images come to mind? If you could make your own Sour mood board, it would probably have one or more of the following: Butterflies, heart-shaped candy, stickers, and flowers. Perhaps sparkling tears running down the face of a prom queen.  But have you ever wondered about the reasons for these artistic choices?

The answer is in the associated meaning of each of these symbols, which drives the story that the song and the album are trying to tell. Without further ado, here are the meanings behind Sour’s aesthetic. And with Halloween around the corner, this could serve as a useful guide to making that perfect Olivia-inspired costume. 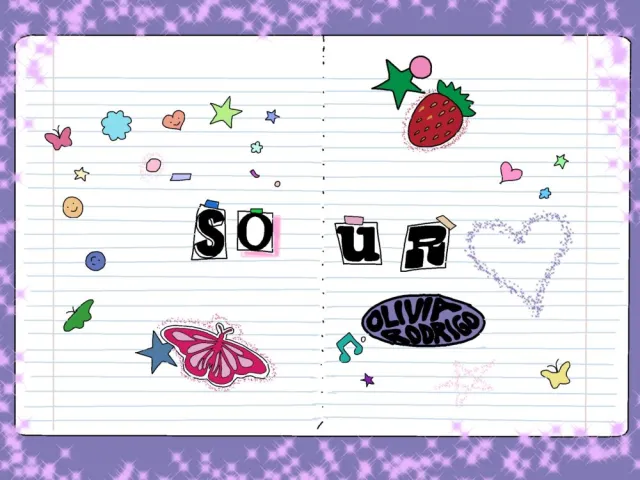 Sour (and Olivia’s Instagram) is decked out in butterflies and flowers. Lots and lots of them. Throughout history, butterflies and flowers have been symbolic of finding beauty in the temporary. Flowers do not stay in bloom for long, and butterflies have short lives. But for what they lack in longevity, they make up for in color and vibrance. In ancient civilizations, warriors had butterflies tattooed on them, representing the short and glorious life of a soldier fighting for his tribe and lands.

In the album, butterflies and flowers are a metaphor for being a teenager. Teenhood comes and goes in only seven years. But those years are full of wondrous self-discovery, naive mistakes, heartbreak, and all the trials that come with blossoming into an adult. Though adolescence is only a small percentage of one’s life, it is raw, wild, and memorable.

Additionally, her VMAs look and stage outfit incorporated lots of butterflies, from her earrings down to her hair ornaments and dress details! (They definitely made her look like a fairy.) The butterfly-themed fashion represent the fleeting rituals of youth such as prom, graduation, and more. Sour hits different when you’re going through these things, which is one of many reasons Gen Z identifies with the album so much. It’s pure teenage angst and emotions, but we all know it will come to pass. 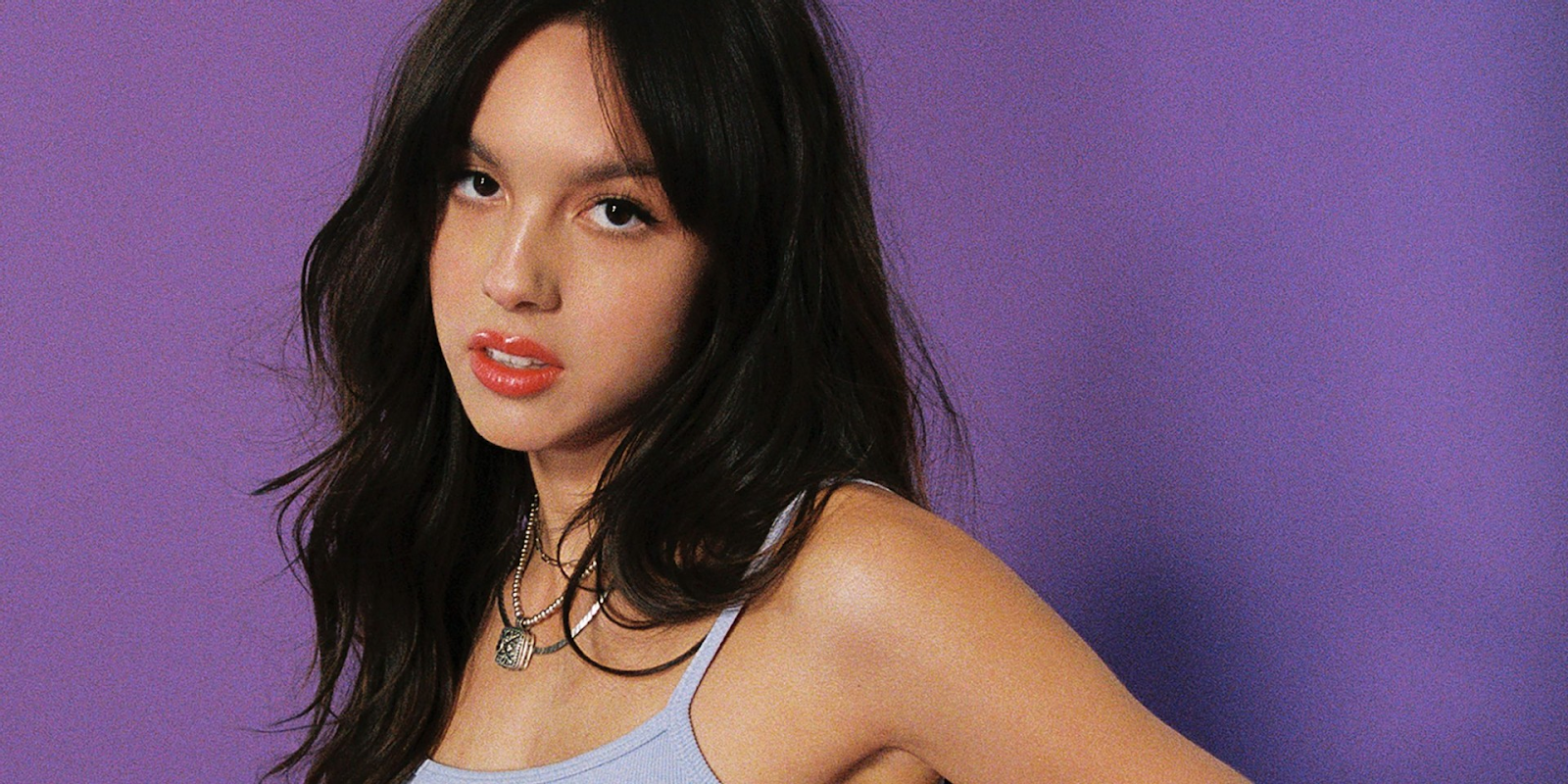 Moving onto the dominant color of the era, Sour’s merchandise, vinyl cover, and album art are all splashed in a soft hue of purple. Associated with introspection, insight, and looking within oneself, the color purple appropriates how much Olivia poured her heart and soul into the album. As the combination of red (passion) and blue (tranquility), purple is also considered a color of duality.

This is evident throughout the album as the singer alternates between passionately belted songs like Brutal and Good 4 U followed by heart-wrenching ballads such as Enough For You and Drivers License. While it is a somber color, much more serious than red or blue, it also has the capacity to feel magical. With its whimsical hue, the color is associated with unicorns and fairies. If Say So and Kiss Me More by Doja Cat sound like light pink, then Olivia’s songs are lilac purple.

Purple is also the signature color of Euphoria, a show that epitomizes Gen Z’s fearlessly creative and non-conformist aesthetic. The dark teen drama series is also credited for sparking current trends in Gen Z makeup that are now staples on Tiktok and the music videos of young artists: from glitter tears to rhinestones around the eyes, vinyl makeup looks, shimmering eyeshadow, and sparkling face crystals. 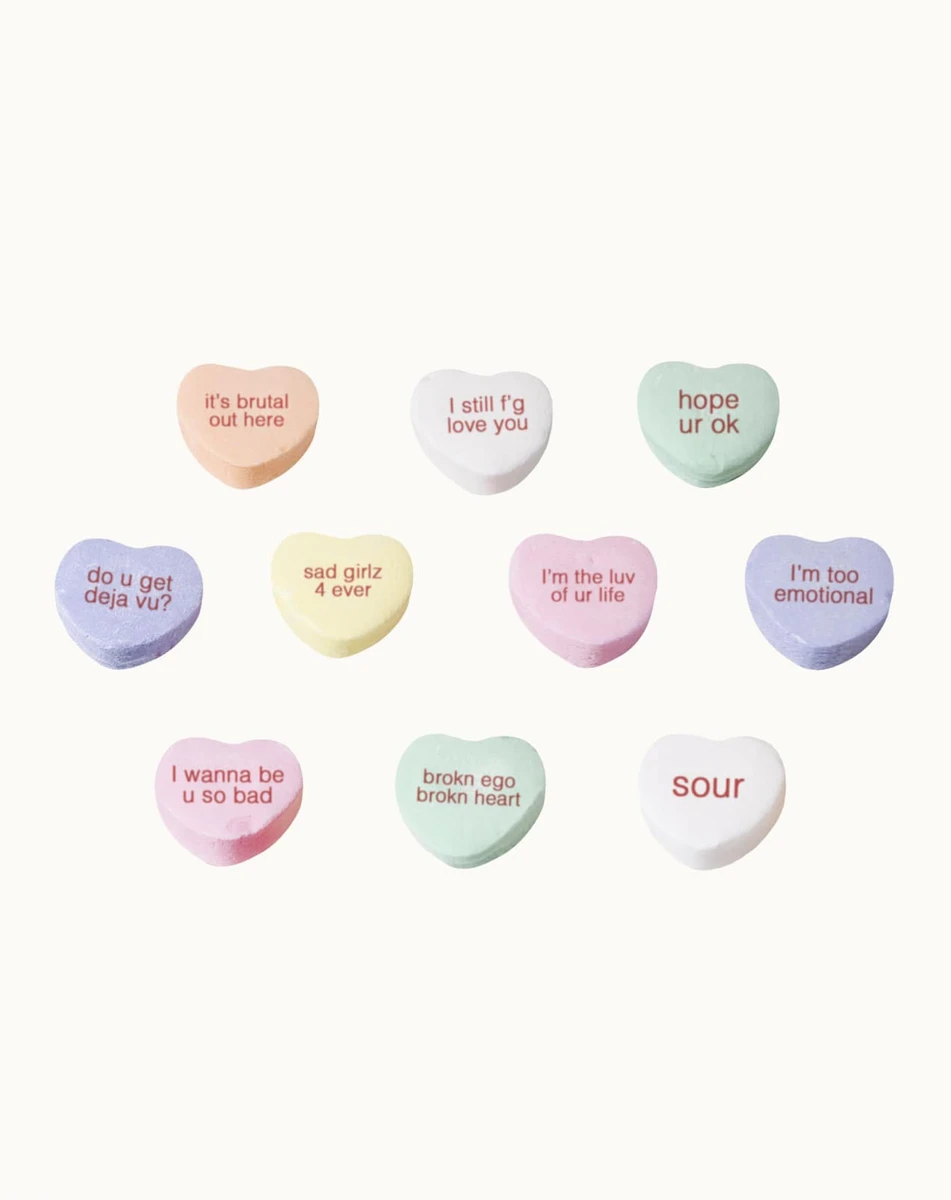 These conversation candy hearts may look sweet, but some of them are sour. At first glance, Olivia’s fun, colorful aesthetic and sweet personality might make you think she’s a bubblegum pop star. But she’s more than that. She’s not afraid to curse in her songs or express negative emotions. She’s a storyteller of feelings that aren’t sweet because human emotions are anything but. They’re messy, dramatic, and not always fun.

And where are emotions felt? You got it, in the heart. In Sour, the candies represent the whole spectrum of human emotions: from red hot anger to purple contemplativeness, deep blue sadness, jealousy green, and drunk-in-love pink. While listening to the album, you will definitely feel every single one of these feelings. 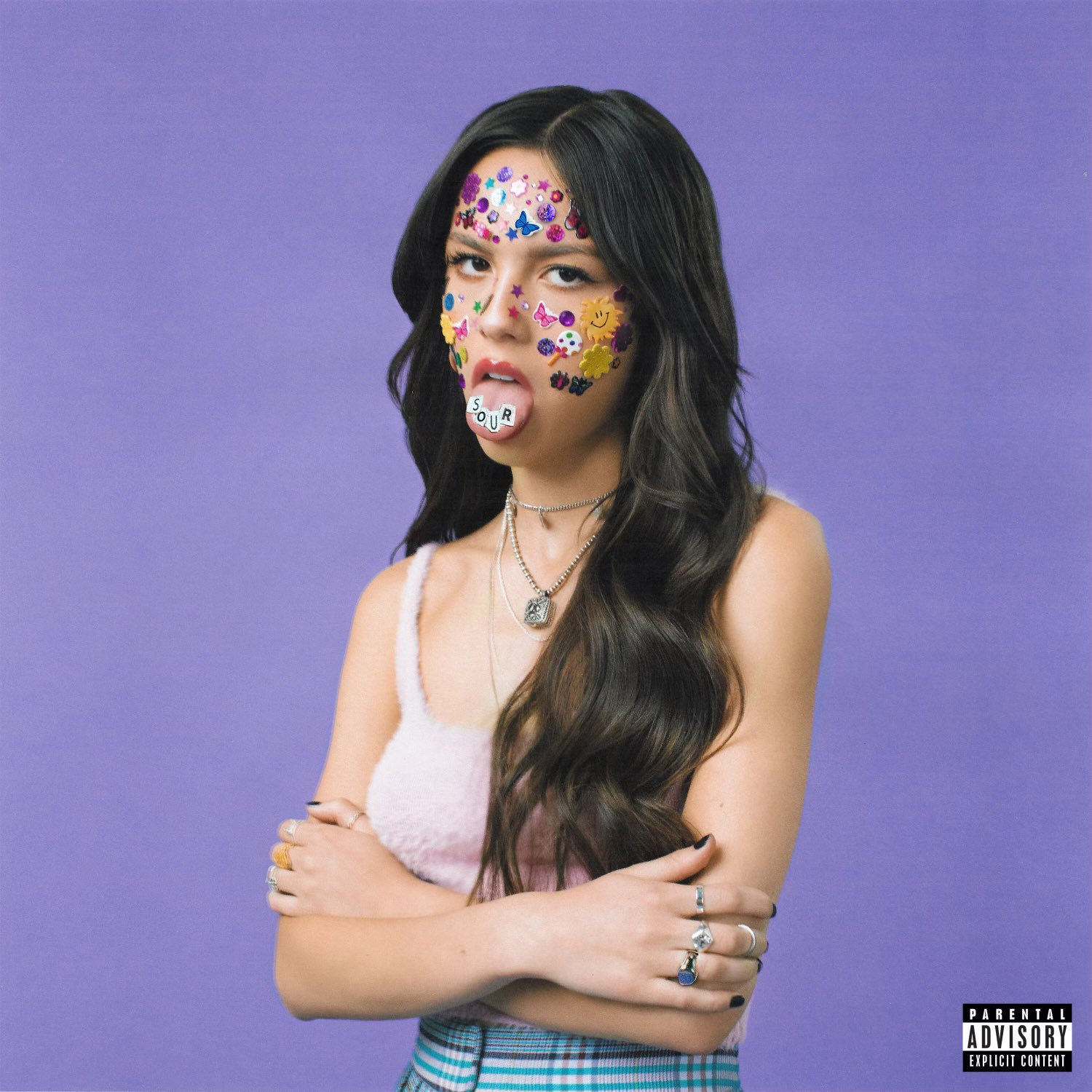 This part will answer one of the most commonly asked questions about Sour’s album art. “Why did Olivia cover her face and tongue with stickers?” Because stickers are a cool layer to add when telling stories.

Stickers are playful, fun, and colorful emblems of youth and adolescence—essential parts of scrapbooks and diaries. You need stickers as a finishing touch when you’re done writing out all your frustration and hormone-driven angst. Or to release all your pent-up creativity or the latest aesthetic you’ve been obsessed with. Stickers are also awesome for cheering up your boring math notebook and helping you daydream during class. Speaking of which, why the notebook?

Aside from contributing to the school aesthetic of the album (since Olivia wrote Sour in high school), the notebooks in Sour convey honesty and raw emotions—like the expression, “reading someone like an open book.” This is why all of Sour’s lyric videos are animated like a scrapbook. She treats Sour like a diary, letting the listener experience things from her point of view. 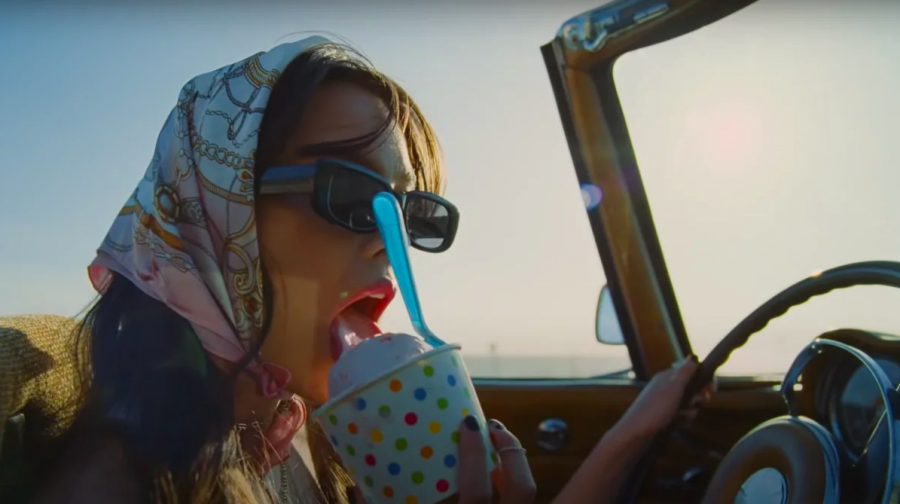 Strawberry ice cream represents the sweetness that came before the “Sour.” They are the memories of a crush, a smooth-sailing relationship, and the good times before everything went south. It provides a compelling contrast to the entire theme of the album.

It’s notable that the lyric “strawberry ice cream in Malibu” in Deja Vu references a highly ideal scenario, relaxing and eating ice cream on a beach without a care in the world. This ideal scenario is far from the messiness of reality that is expressed in songs like Brutal and Enough For You. 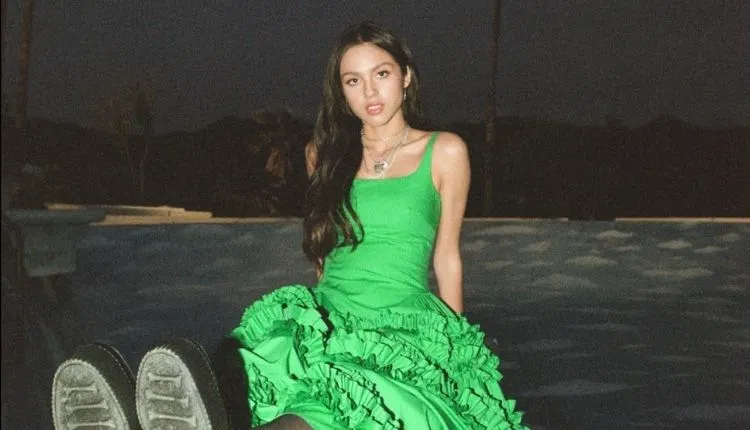 In literature, green is the color of envy, which Olivia expresses in Deja Vu as she watches her ex’s new girlfriend move on to someone else. This theme of being green with envy continues in songs like Jealousy, Traitor, Good 4 U, and Drivers License. In Sour, green represents the bitter side of its spectrum of flavors.

All of Sour’s music videos have Olivia singing inside of a screen. Whether it’s on a phone, television, security camera, or projected onto a person; screens represent performance or “playing a part,” as well as the divide between the audience and the performer.

In Sour, screens represent the multifaceted quality of human nature, and how many roles we have in life. In your own story, you are the main character, but in someone else’s you might be the antagonist. For example, in Drivers License, Olivia is envious of “that blonde girl” while in Brutal, she becomes the blonde girl. In Deja Vu, she is wistful and pensive about her jealousy, but screams in a flaming room in the music video for Good 4 U. While most people only get to see one side of a person, the screens in Sour show that a person cannot be boxed into that one side because there is so much more. 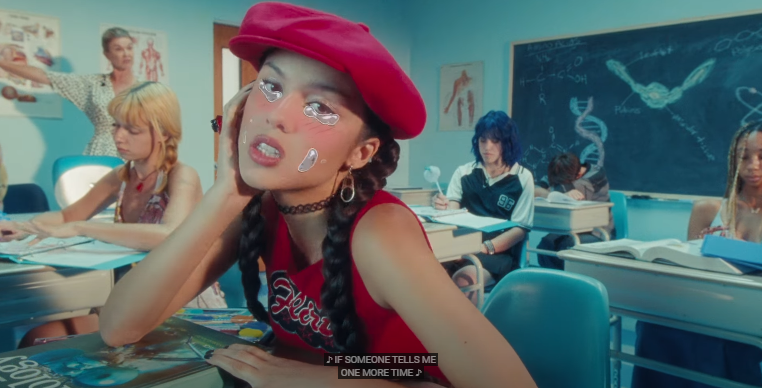 The face filters represent awareness of social media, particularly in Brutal. In the music video, she portrays a celebrity on livestream singing in frustration “All I did was try my best, this the kind of thanks I get, unrelentlessly obsessed.” This references the illogical amount of hate that celebrities receive by simply being easy targets since they are in the limelight. It also references the obsession of news companies with making false narratives about public figures in order to get more views.

This is a reach, but perhaps they also represent how Gen Z expresses themselves. Today, young people have more conversations about mental health, talk openly about societal issues, and wear their hearts on their sleeves.

And that’s it! You now understand Sour’s aesthetic. It’s very meaningful, and it’s also really cute, so no wonder teens, young adults, (and some millennials) all over the world love to emulate it online.