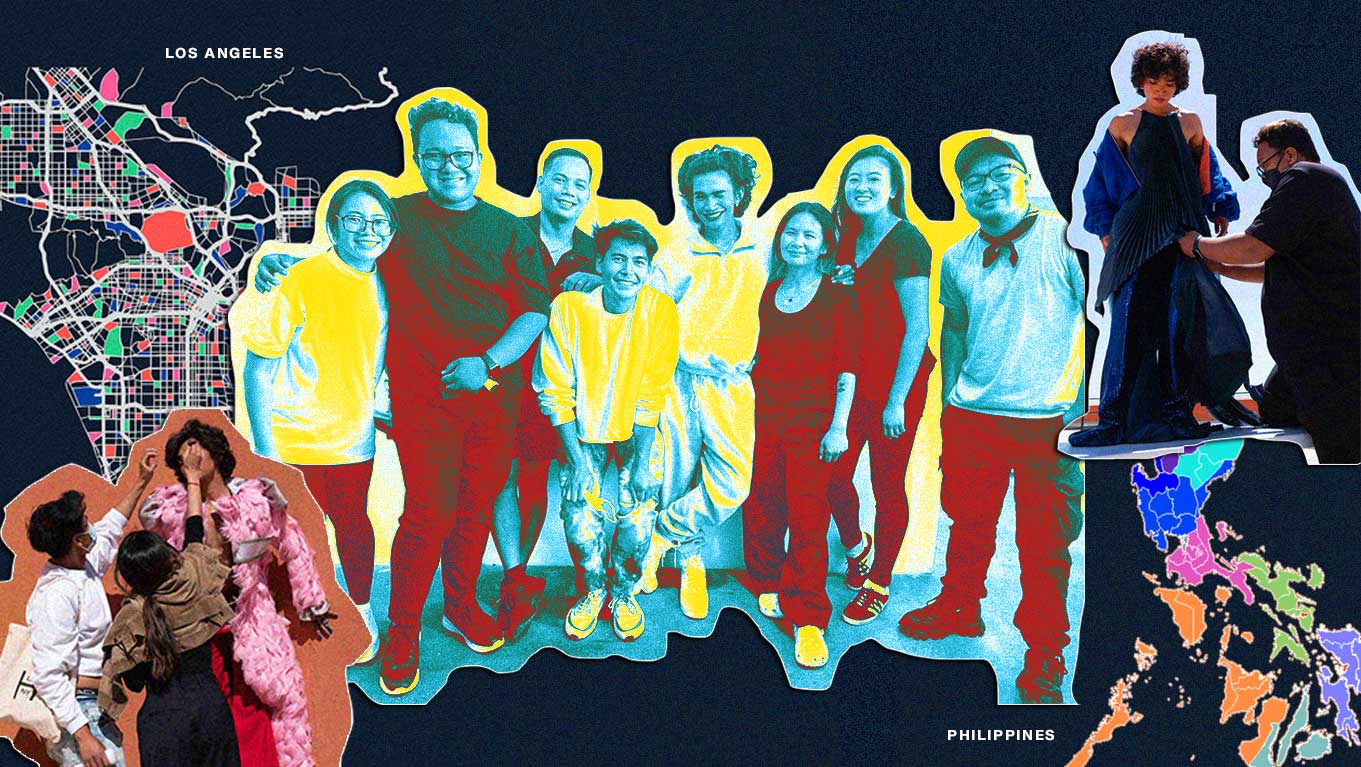 It doesn't get more Filipino than this.
BY Lyn Alumno

If RuPaul has All Stars, Bretman Rock had this stellar all-Filipino cast.

No good work comes without a great team. Surprisingly, it was Bretman Rock’s first time working with an all-Filipino cast. From the creatives even to the food that was served on that day, it just had to scream Filipino AF. As the social media star puts it, “I worked on this with an entire team of Filipino creatives, from the Filipino banters behind the scene, the bibingka and Jollibee we had for lunch and being on FaceTime with Manila the whole day—this project was as Filipino through and through,” he shares on his Instagram post. Below are the entire team of Filipinos who made Bretman Rock’s cover shoot happen.

NYLON Manila’s Editor-in-Chief knew it was going to be a challenge having to shoot remotely all the way at Los Angeles given the time difference and the agonizing logistics. From building the concept, to choosing the team, to helping the stylist with the shipments of the clothes for the cover, Angelo was on top of it all. “I already knew it had to be done in the full spirit of the Filipino. Meaning the cast of creatives in LA had to be Filipino, certain elements had to be Filipino, and the whole energy just had to exude being Filipino.” And yes, he was on FaceTime from 12 midnight up to 9 in the morning just to monitor the 8-hour shoot and was still able to beautifully write the heartfelt cover story on Bretman afterwards.

On bringing the vision to life, “this meant many group messages and WhatsApp calls, numerous circle backs, close to 100 emails, and a lot of late hours clocked in with the team in LA. But it was all worth it, for the LGBTQIA+ and Filipino community,” shares Angelo. “Everyone looked like each other, everyone spoke like each other (despite it being fragmented and laced in accents), everyone felt like each other. It just hit different, even from the screen miles away.”

ADVICE FOR ASPIRING CREATIVES: “Even if the world makes both passive and aggressive efforts to belittle your work, outright dismiss and ignore you, and dull your shine, don’t ever think of giving in to them. This is all part of the process, after all, growth was never meant to be comfortable. Many people will want to rob you of your joy, but please hold on to it close. This is your story and superpower, and no one can ever take that away from you. Keep at it, even when the going gets tough—and it will—because once you hurdle through, it will be well worth it. You can do it, trust me. Oh, and please be kind.”

Photographer Raen Badua has already worked with a number of celebrities. Namely, Catriona Gray, Tinashe, Saweetie and Cassie. Just scroll down on his Instagram page and you’ll see his eye for youthful and edgy portraits, so tapping him to photograph Bretman Rock was a no brainer. “It’s always fun working with an all-Filipino team, especially when you have Jollibee and Bibingka on set,” he says with a laugh. Despite the scorching heat on the rooftop of the location, he was willing to do anything and everything to get the job done—even if it meant having to lay on the ground all while basking in the sun. Now living in LA for two years after moving from New York, Raen takes pride in his roots and encourages upcoming creatives to focus on honing their craft and themselves.

ADVICE TO ASPIRING CREATIVES: “Focus on your craft and on yourself. Don’t let other people’s opinion affect your vision and your dreams.”

Stylist Nikko Panti admits that he’s relatively new to the industry. But having spent two years on the job has already catapulted him to working with amazing international publications and personalities like Liza Soberano and Enrique Gil and even Piolo Pascual. His styling work with Bretman Rock may be his finest yet, having to prepare in a short span of time and mindfully choosing Filipino designers to dress him in along with his styling assistant Adrianne Monique.

“I have pretty much worked with Filipino photographers, models, and creatives almost all of the time; so when NYLON Manila decided to push an all-Filipinx team for this cover shoot, I knew that the shoot would not only be a fun environment, but also we will all give and do our best—often, putting in the extra mile—to deliver what is asked of us.”

ADVICE TO ASPIRING CREATIVES: “Whatever path you take: photography, modeling, styling, hair or make-up artistry, creative directing, writing—is never be afraid to take risks. And always bear in mind that the fashion stories that you’ll create matter, it will find their rightful audience.”

Born and Raised in Manila by her lola who she Facetimes with everyday, Daphne Chantell‘s journey to becoming a makeup artist is one that we can all resonate with. Being an Asian American girl and feeling the lack of representation made it tough, but she reclaimed her power by becoming a makeup artist on the rise. True enough, her work on Bretman’s cover shoot was spectacular. Stunning is an understatement to say the least. On being tapped for the shoot, Daphne shares, “it felt open, serene and comfortable to be with an all-Filipino team for the NYLON Manila cover with Bretman Rock. A truly unique experience that I hope will not be the last.”

ADVICE TO ASPIRING CREATIVES: “When the opportunity arises, use your bravery to take it. No matter how scared you are, take it. No matter how undeserving you may feel, take it. It belongs to you. It does not matter who opens the door, remember they do not own the room but are always worthy of your respect. Stand in your light! Never give up.”

Hairstylist Jojo Torres is someone who understands the assignment very well. Working on runway shows like Prada, Givenchy, Valentino to name a few, along with international magazine titles, Jojo’s been making magic all over the world. As evidenced by Bretman’s amazing curls and George Michael blowout on the cover, he knows how to bring out your best features. “Honestly it was amazing working with an all Filipino team especially out here in the States because that rarely ever happens and sometimes diversity on set is still not happening,” Jojo shares. “It’s very comforting also that knowing that we all came from the Philippines and are doing something together for NYLON Manila almost felt surreal.”

ADVICE TO ASPIRING CREATIVES: “It’s not going to be easy. You’re not always gonna be around good energy. It’s a journey and as long as there is love in what you do, it will show and somewhere a long the way you will meet individuals that also see that. It’s a fun rollercoaster trip if you let it.”

Film maker and photographer Francis Gum has already worked on a variety of short films, publications and designer campaigns. Emphasizing the huge influence of his heritage in his works, Francis was the perfect choice to create Bretman’s fashion film. Films that feature Filipino jeepneys, ternos, tsinelas and even the bayong are common elements in most of Francis’ works which is why working with an all-Filipino team was an honor. Francis shares, “proof of that is the energy on set and the enthusiasm of producing an issue that is authentically Filipino. Our conversations about our experiences back home, especially with Bretman who’s a fellow Ilocano, were also some highlights of the day.”

ADVICE TO ASPIRING CREATIVES: “My message is to not be afraid to express your vision. You have to be honest with what moves you and with what you want to create. It will reflect in your work and will set you apart from other creatives.”