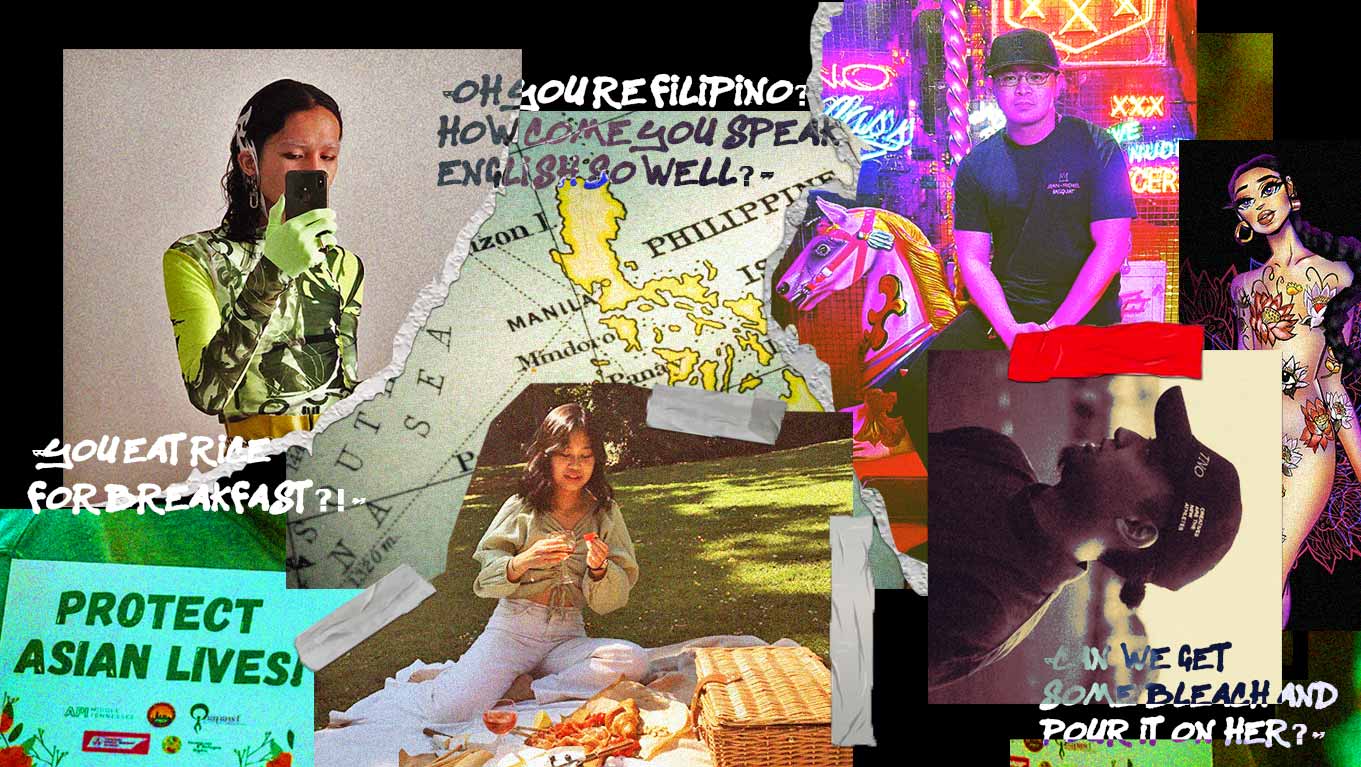 "Oh, you're Filipino? How come you speak English so well?"
BY Lyn Alumno

As if the racist comments weren’t enough, what was the worst thing a non-Asian has ever said to you? These 4 Filipinos talk about what it’s like growing up outside the Philippines.

We’ve all heard of the so-called “American dream.” At some point, a lot of us leaned into the good ol’ fantasy of bringing honor and success to your country by “leaving” it. But what happens when you’re actually born and raised in that “paradise” most Filipinos dream of? I’ll go first.

I wasn’t exactly born in the UK, but I’ve spent a few years there for education, and to tell you bluntly, it wasn’t a walk in the park as people imagine it to be. In one of my classes, we were discussing what colors complemented different skin tones. Our tutor asked me to stand up and identify what my complexion was. Of course I had pride in my roots and said, “I’d say I have tan skin because I grew up in a tropical island.”

With no hesitation, my tutor said, “Yeah we know, you don’t have to rub it in our faces. Can we get some bleach and pour it on her?” as he proceeded discussing the best tanning salons among my Caucasian classmates. I froze, but nonetheless, I’m lucky I still had supportive contemporaries. The moment I arrived, there were countless people saying, “Oh, you’re Filipino? How come you speak English so well?” along with the constant “ni haos.” It baffled my mind.

Now, imagine dealing with these micro-aggressions your whole life. In light of the recent hate crimes that blatantly target Asian groups and the rise of the #ProtectAsianLives movement, we asked these four Filipinos how it was like growing up in a foreign country and how they made a name for themselves despite the endless stereotypes in their chosen field. Yes to representation.

There were probably times where people could have talked about the way I looked without even realizing it myself. But I was lucky enough to have parents that taught me to be a tough kid and not pay attention to what people around had to say about my origins. I mostly grew up around people that were always 100% supportive.

I used to be only be focused on my own culture, which isn’t bad either. But I also became more aware of what’s happening around me. It made me curious and considerate about other cultures in Europe and the rest of the world. The only difference would be that I used to ignore what people had to say about me, now I just don’t let anything slip through.

I was lucky enough to be surrounded by people who always believed and saw the potential in me. I worked hard to get where I am now and everyone I worked with acknowledge it. I know it is not that easy for everyone.

It’s been really challenging to grow up and find my own identity with two different worlds in the same place…Having a lifestyle with the Filipino community, with a French/European mentality and lifestyle.

I guess I’ve been forged to embrace both cultures, the Filipino and French. There were some struggles with my parents as sometimes I was more into the French culture than Filipino.

I’ve been active in a Catholic Filipino community in Paris with many events every year in different cities, which allowed me to meet Filipinos from around Europe. It’s been very interesting to meet Filipinos who were more into Filipino culture and some with their local culture. It’s also been amazing to meet non-Filipino friends in Paris with open minds, which led me to embrace both cultures that make me who I am now. I guess it made the balance.

I guess we all heard that “tching tchong.” Let’s say it was at school, not straight to me, but to my mom when someone from the office at school told her that maybe we should go back to our homeland if it’s too hard for me here in France.

I’m blessed that most of my struggles were not centered to my origins. I’m thankful for the opportunities I’ve been able to take in my journey. I’ve always been surrounded mostly by people with an open mind, and most of them are those I met along the way.

Maybe I’m too focused on every positive side of life that I didn’t even notice the negative things that could have been related to my origins. Even since the beginning of this pandemic until now, I never had direct confrontation related to my origins. Or maybe sometimes, but not to the point that it affects and makes me remember those moments.

Communication and sharing the awareness. As human beings we are made to interact with each other. We all have a mouth and ears and mostly a brain to reason with our thinking. It is through direct open-minded conversation mostly that we build bridge with one another. It’s not by being distant, separate that we can make progress. Even though most of times for sure we do not agree with each other. But at least, every conversation is a way of interacting, sharing ideas, values. And the more we communicate and shares values, the more our self-thinking evolves.

Growing up in Hong Kong, UK and Canada, it was a blessing to be exposed to a kaleidoscope of culture and art.

Coming from an Asian background, especially from Lapu-Lapu, Cebu, respecting elders, protecting loved ones and keeping the warrior spirit alive is a tradition that needs to get passed to future generations.

It forces you to harden up and learn strength in numbers. Shout out to the Perivale/Greenford community in London, UK. It has gotten much better now though, because Filipinos have made a name and gained worldwide respect—we have some of the best singers, dancers, beauty queens, and artists.

Thankfully there hasn’t been much crazy struggles in my current field.  Filipinos abroad are most known to be hardworking and accommodating. My first visit to Toronto, Raygee from South East Cartel gave up his bed and slept on the couch so I can have a comfortable stay. You’ll find other Filipinos doing that for each other out here.

I’ve had the privilege to work in an industry that generally appreciates collaboration and talent, which has helped transcend the trans-minority tension and promote unity in general. But I do feel the pain of my fellow Asians, because those victims could’ve been my mum/grandma/relatives and God knows what would happen if anyone harms them.

I didn’t know any different, but I knew I was different. I moved to the UK when I was 7 years old and it’s sad to say, but although I spent some time growing up in the place where I come from, I really don’t remember much of it. I only remember it through stories my parents would tell me, pictures and home videos. So, growing up in a foreign country was all I knew, I didn’t know any different.

I remember being insecure about people knowing I ate rice for breakfast since the norm here is cereal, toast, porridge. “What, you eat rice for breakfast?!” some would say with a shock on their face like they’ve never heard such a thing before. Some might see this as a minor or trivial thing, but it contributed to my feeling of being different.

I think it’s definitely made me more of an open-minded person, since I feel that those who ostracize others for their race are narrow-minded people. They can’t see that beyond their own race, there’s other races that are just of EQUAL VALUE. Growing up as an Asian in a foreign country, I’ve learnt to appreciate both cultures and races, and I’d like to think that because of this, I can better appreciate others. And it’s heartbreaking to say that Asians at the moment have to speak out to make people see that our lives are of value, too.

Is it sad to say that I somewhat feel “lucky” that the most ridiculous things that non-Asians have said to me are the “ni hao” comments. Like, I’m thankful that I haven’t had anything worse like “go back to your country,” “you don’t belong here,” or some derogative comment about my Asian characteristics or stereotypes cussed at me, like I know many Asians have had.

Saying that, I feel that these “ni hao” comments are so common, since every Asian that grew up in a foreign country has probably had it thrown at them at some point, that we can almost think that it’s not of a big deal and try to brush it off. But it is a BIG DEAL! Any form of racism is a big deal.

I’m blessed to say that I haven’t really faced any struggles in thriving in my field as a health professional. Sure, I’ve thought about what if someone refuses care and treatment from me because of my race, especially during this pandemic that’s associated with Asians, but thankfully I haven’t had that…yet.

I’m actually lost for words that this silent war and “oppression olympics” even exists among minorities. If anything, minorities should be able to symphatize with other minorities even more, yet we’re trying to prove who’s more oppressed?

If you want to know more about #ProtectAsianLives and help, you can visit sites like the Anti-Asian Violence Resources or Stop Asian Hate on Instagram. This is the first part of our upcoming series that sheds light on the stories of Filipinos and Asians all over the world.