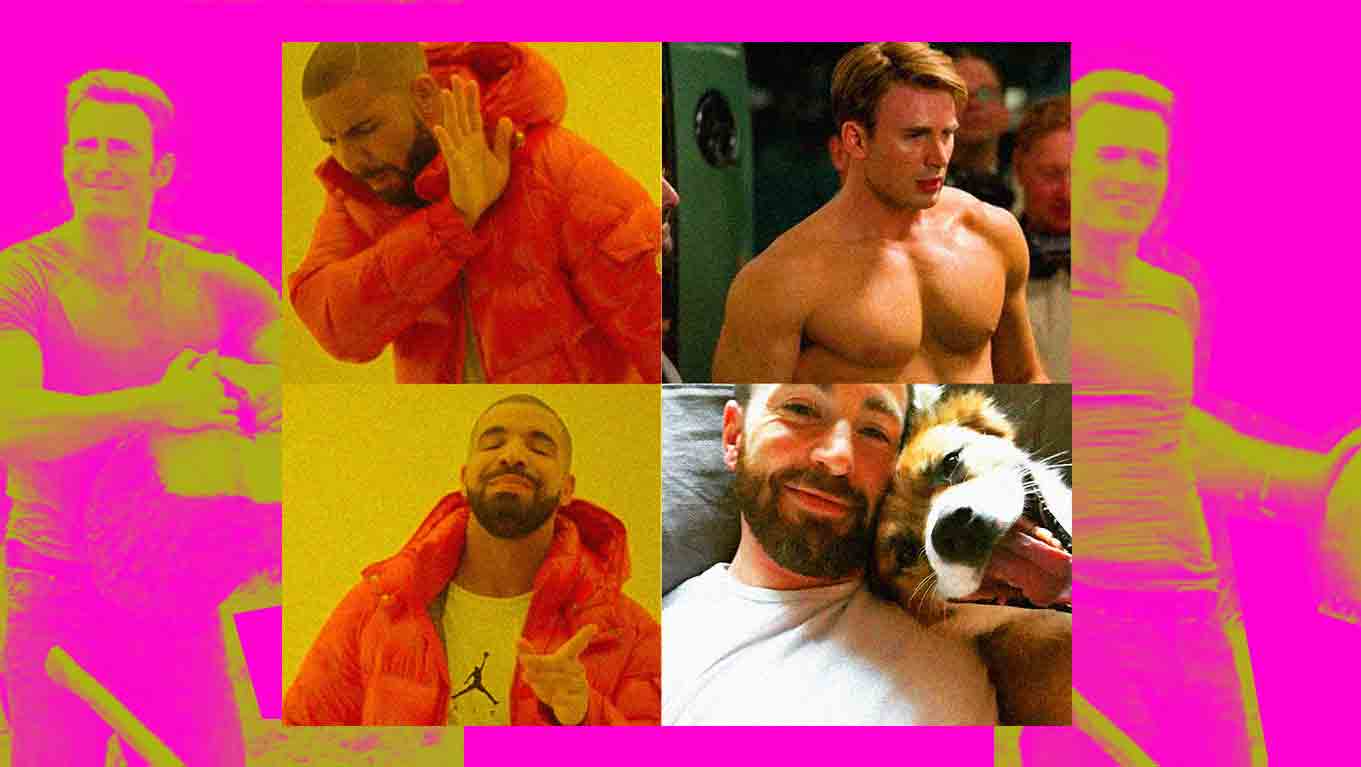 If You Aren’t Following Chris Evans On Instagram, Here Are More Reasons Why You Should

Presumably a resident living in your mind rent-free, the perpetual internet trending topic that is Chris Evans is giving us more reason to follow him on Instagram.

Related: DISNEY ISN’T MESSING AROUND AS IT GOES FULL STREAM AHEAD WITH MARVEL, STAR WARS, AND PIXAR MUST-SEES

“I guess I caved,” expressed Chris Evans in an interview with Jimmy Fallon in May last year, mere weeks after the actor surprised the internet by signing up for Instagram. While he certainly was no social media scrooge, being happy and content on Twitter, where he was (and still is) quite adept at from end-to-end of the bird app spectrum, a quarter of Hollywood’s famous Chrises was hesitant to join in on all the fun. “I feel like such an old man; I feel so late to the party. You know what it is? I had too many good pictures of my dog,” he said. “These are being wasted on my phone. I gotta put these somewhere.”

Bless the internet gods that the somewhere happened to be on Instagram, because while a lot of his thoughts—all serious, sentimental, and silly of it—were already being shared on Twitter, more of the world needed to see Chris Evans. Being the man that he is, Captain America caused quite a stir beyond hopping in on the social media app. Oh, you know, just flagging Instagram because of an unusual surge of follower activity in two days. A little over two million, just casual for the Hollywood star. A dog photo dump and unusual engagement activity aside, the milestone-making first post of Chris Evans happened to be much more profound, one that was for a good cause.

“Hello Instagram!! #ALLINCHALLENGE accepted!! Thanks for bringing me in, @prattprattpratt. What a great cause,” writes the punctuation happy Avengers alum, highlighting the digital fundraiser that aims to gather funds to help eliminate food insecurity, before finally throwing the gauntlet to Sebastian Stan, Anthony Mackie, and Billy Porter—at least virtually.

Following the inaugural post that currently has 11,527,748 views and 2,632,207 likes, Chris Evans has since racked up to 9 million followers, taking up some serious space on Instagram. No surprise there, really. Now, unlike some vacuous personality with considerable clout, the actor is pretty good on Instagram, despite posting sporadically. It may be far and in between, but when he whiles his time on it, it is mighty worth it.

Early on, he alluded to regretting the move on Instagram, which initially scared us mere mortals. But in less than 50 of his posts so far, Chris Evans is enjoying himself—and so are we.

If for some strange reason you aren’t following Chris Evans on Instagram yet…why? No, seriously, this is your cue to get on it. Well, after reading a few more reasons below, in case you need any more convincing.

Dodger Is The Star Of This Show, Not Chris Evans

The good man did say that he put up the account to house photos of his equally popular pooch, Dodger. From unfortunate quarantine buzz cuts, dynamic duo dailies, to hip replacement updates, this may or may not be a Dodger masquerading as Chris Evans Instagram page, not that we’re complaining either.  Truth be told, the world needs more of Dodger, please, dog dad.

Where There Is Chris Evans, So Are Trees

Fun fact: Chris Evans is a fan of fall. “This is turning into an autumn fan account, but how can I not post these 3 triumphs that live in front of my house?” he muses on his fourth tree post. You can’t go against nature on this one, because it really is a thing of beauty.

In This Starting Point, Chris Evans Shares His Politics

Already opinionated and outspoken on Twitter, Chris Evans is in no way subscribing to the whole curated, antiseptic, and desensitized usual of Instagram influencers and Hollywood celebrities. Here, he continues to engage in the state of American politics on his feed posts, Instagram stories, and link in bio, which leads you to his passion project, A Starting Point.

Described as a connection of elected leaders with their communities, this scrupulous undertaking is a convergence of opinions, points-of-view, and hopefully, solutions to be able to move politics away from the chambers of the select few and into the conversations of every citizen. In the civic engagement video-based app, Chris Evans, together with Mark Kassen and Joe Kiani, intends to “create a bipartisan channel of communication and connectivity between Americans and their elected officials with the goal of creating a more informed electorate.” Proving especially necessary and helpful during their country’s recently concluded presidential elections, the mission continues for a more informed and inspired voting population.

Captain America Gets To Be Goofy With Pranks

Now, if you happen to follow Chris Evans and have gone through every possible interview on YouTube, you will know that the man is surprisingly funny. On Twitter, he not only flexes his acerbic wit and humor, but he also enjoys a good meme. So, it should be of no surprise that he also likes to pull pranks, which is often recorded on Instagram Stories. A particular favorite is the series of silly scares he and his brother, Scott, got way too involved in during the holidays. We’re pretty sure there is a lot more where this came from, which usually elicits his infamous affectation of glee: the throwing of his head back laughing while cupping his chest. Look it up.

He Breaks The Internet Here

If you’re Chris Evans, you’re bound to break the internet at some point or every so often. He already did just by signing up, remember? Fiercely guarded and private as he is, even Captain America fumbles with the ‘Gram, because last year, he apparently posted an explicit photo on his grid by accident, which naturally set the internet on fire. While the post was promptly taken down, it did spawn quite the reactions from stars. However, it wasn’t all woes for Chris Evans, because being smart about, he did live smarter about it for a well, better world, at least on social media, by using the unfortunate incident to remind his followers to vote.

“That’s called turning a frown upside down,” he says, composing his obviously flushed and flustered self in an interview. “Look, it was a very interesting weekend full of lessons learned, a lot of typical moments. You know, things happen, it’s embarrassing, you gotta roll with the punches. I will say that I have some pretty fantastic fans who really came to my support. That was really nice.”

Oh captain, our captain, you really do make the world a better place.