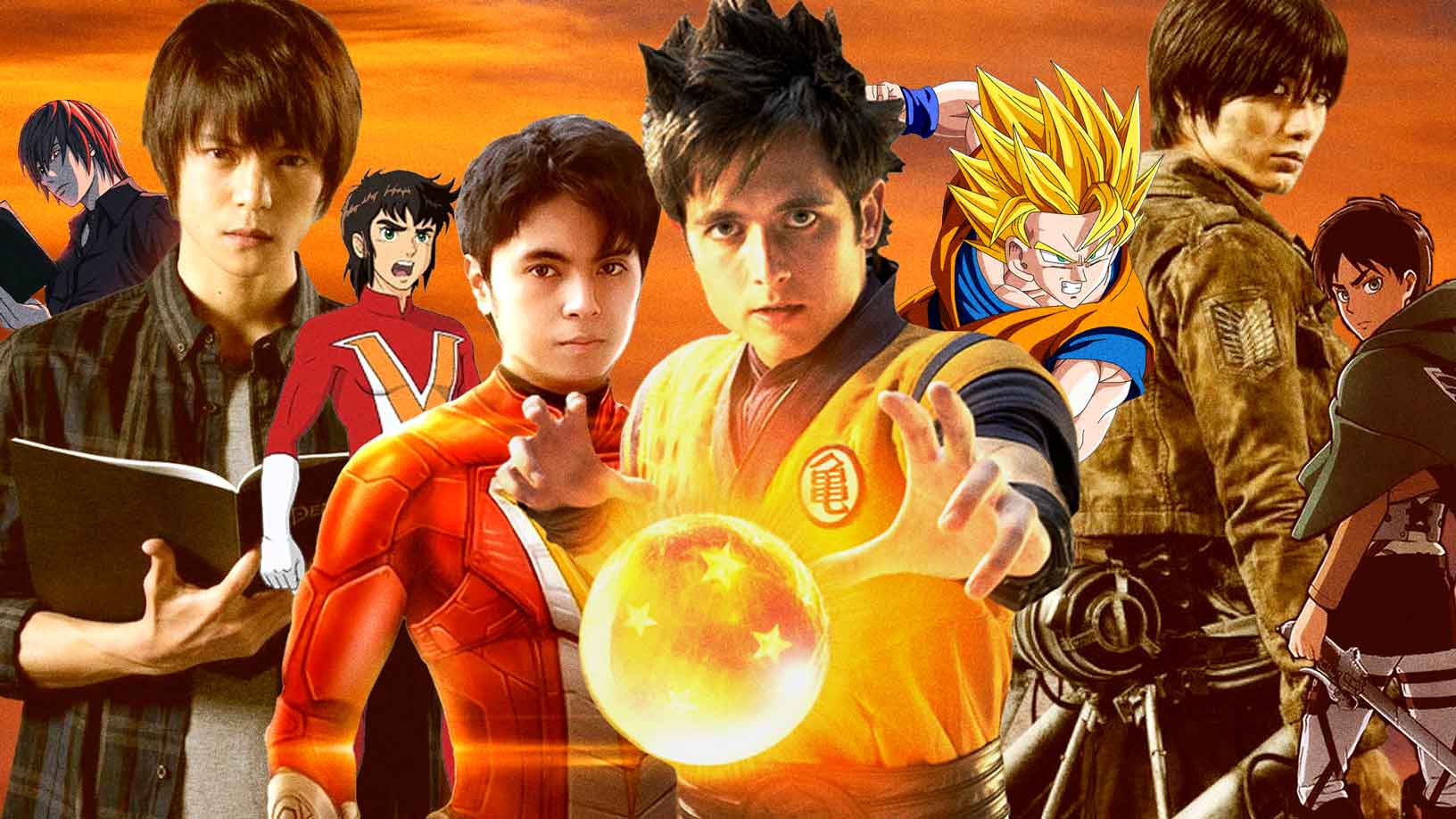 When it comes to live-action adaptations of anime, it’s a mixed bag with its fair share of stunners and stinkers.

Anime is one of the most popular mediums of entertainment in the world. From Tokyo to Los Angeles, anime is watched by millions of people around the world. Even if most anime are voiced in Japanese, it boasts of a global appeal even if the audiences don’t even speak the language. (There are subtitles after all.) And just like with most forms of entertainment that get popular and ultimately expand their universe, anime has seen its fair share of live-action adaptation.

For example, Netflix is set to drop their live-action adaptation of beloved anime Cowboy Bebop this November 19. The show is a fan favorite, so expectations are expectedly high. But when you look at other anime that have gotten their own live-action adaptation, the results have been a decidedly mixed bag, some being received well, while others have been critically derided. With that being said, here are some anime series that got their own live-action movie adaptation.

The Alita: Battle Angel live-action movie adaptation took so long to release that people thought that it was going to be a complete failure. Delay after delay caused people’s confidence to go down, but when Alita was finally released, it surprised many with just how good of a movie it is. The film was positively received for how close the plot was to the source material and how even if you didn’t watch the anime, you would still enjoy the movie. It was also praised for its satisfying action, visual effects, and acting of lead actress, Rosa Salazar. Plus, it’s the only movie where you get to see Christoph Waltz wield a giant hammer. Give this highly underrated film a try.

The Attack On Titan anime and manga it’s based on is one of the most popular entertainment properties out right now. It has attracted a global fanbase that extends to people who don’t normally watch anime. So, it was expected that a live-action adaptation would soon follow. But sadly, it didn’t live up to the hype of the original. On one hand, the movie was praised for its visual effects (to a certain extent), ambition, and how the Titans looked. But on the other hand, the casting raised many eyebrows as all the characters were played by Japanese actors, despite the fact that Mikasa is the only character of Japanese descent in the anime and the rest are European. It was also faulted for having a bland plot and 2D characters.

BLADE OF THE IMMORTAL

Based on the manga series by Hiroaki Samura, the 2017 live-action Blade of the Immortal movie is arguably one of the more underrated live-action adaptations you can find. The movie follows a samurai named Manji. During a battle, he is cursed with immortality which leaves him without a sense of purpose. One day, he meets a young girl named Rin and agrees to help avenge her fallen parents. The film revolves around the first two story arcs of the series, so it doesn’t feel too bloated. It was also praised for its great acting, faithfulness to the source material, sprawling violence, and weapon-based action. You can currently catch this one on Netflix.

Netflix is no stranger when it comes to making live-action adaptations of anime. The live-action Bleach adaptation gives us hope that their Cowboy Bebop adaptation will turn out great. The Bleach movie covers the first major arc of the series and follows the story of Ichigo Kurosaki, a teenage boy who gains the ability to see ghosts, and how he meets Rukia, a soul reaper. The film features some good acting, great effects, and didn’t try to cram too much story in its 1 hour and 48 minutes run time.

To compare the Japanese and American versions of the live-action adaptation of Death Note is like comparing night and day. The two Japanese movies tell the first few arcs of the anime and have been praised by fans for their similarity to the source material and sticking close with the character’s behavior, appearance, and storylines. It captured the horror, suspense, and crime tone of the anime very well.

The American version, on the other hand, was a complete waste of time. The Netflix adaptation missed the mark on nearly every single important aspect of the series. The movie saw too many changes that it lost the spirit of the original and just felt plain silly. If you want to see L and Light Yagami in live-action, it’s highly suggested you go for the Japanese version.

For all the bad rep Netflix get’s for its anime adaptations, the streaming site actually has some really good anime. Case and point, Devilman Crybaby came out in 2018 and is not only one of the best anime you can find on the site, but is also the most popular iteration of the Devilman franchise. Did you know that Devilman had its own live-action adaptation in 2004? If you didn’t, then it’s best you don’t watch it. By all accounts, the 2004 Devilman movie was a complete mess. Among other things, it was dragged for its bad plot, over-the-top-acting, cheap production design, basic visuals, and tendency to dump info on the viewer. It was so bad that it bombed at the box office.

Where do we start with this mess? Even if you do not like anime, you must have at least heard about Dragon Ball and series protagonist, Goku. The show is a cultural icon at this point. The live-action adaptation, meanwhile, is a lesson on how to not make a movie. Some of Dragon Ball Evolution’s many sins include whitewashing Goku and most of the cast, bad acting and effects, and a lack of understanding and respect for the source material. If you’ve seen the movie, you can tell that the filmmakers did not know what they were doing. Dragon Ball Evolution is so bad that it’s the poster child of why you should never adapt anime into live-action.

Whenever Netflix makes a live-action adaptation of a beloved anime, there are hits (Bleach) and misses (Death Note). Fullmetal Alchemist sadly belongs in the latter. Based on the beloved anime series of the same name, Fullmetal Alchemist did not meet up to the standards of the series and divided fans. While some liked the movie for its visuals and costumes, others felt that the story of Edward and Al was too rushed and didn’t fully capture the anime’s themes. This wasn’t the best way to adapt the series, so watch this act at your own risk.

GHOST IN THE SHELL

The Ghost In The Shell anime movie is not only seen as one of all time, but also one of the best films in general. So, when Hollywood set out to make a live-action adaptation of it, people were understandably suspicious. And as expected, Hollywood sadly dropped the ball on this. The first and most infamous mistake of the movie was casting Scarlett Johansson, a white American actress, in the role of Motoko Kusanagi. Whitewashing aside, the movie was also criticized for its lack of Asian representation. The adaptation was also lacking in the original’s atmosphere and philosophical themes.

Hirojiko Araki’s JoJo’s Bizarre Adventure has truly taken a life of its own. Even if you haven’t seen the anime or read the manga, then you at least heard about it or seen one of the countless memes to spawn from the show. So, when a live-action movie adaptation was released in 2017, expectations were high and those expectations were mostly met. JoJo’s Bizarre Adventure: Diamond Is Unbreakable Chapter 1 was positively received and a success at the box office. It was noted for its capturing the anime’s uniqueness, style, environment, and over-the-top effects. The only thing we need now is for a sequel to drop.

Unlike most anime, Ruroni Kenshin is more of a grounded affair with its take of a classic samurai story. But that doesn’t mean it isn’t any good, far from it, in fact. And luckily, the live-action trilogy that came out between 2012 and 2014 met both fan and critics’ expectations. The Ruroni Kenshin live-action movies were noted for their respect to the source material in the story and visuals, but still keeping things nuanced to justify an adaptation. The movies are also remembered for featuring some of the most intense and memorable sword fighting scenes in recent years. The trilogy is currently available on Netflix if you want to give it a try.

When the live-action Speed Racer was first released in theaters in 2008, it was met with a mixed response and disappointed at the box office. But over the years, the movie has been seen in a better light and regarded as better than what people initially thought. Based on the 1960s anime of the same name, which also went by Mach GoGoGo, Speed Racer was directed by the Wachowski sisters, the same people who made the Matrix trilogy. Needless to say, they delivered once again on the visual aspect. While the story is basic and the acting was nothing to complain about, it’s in the visuals and effects where the movie truly shines. It’s like the movie was dipped in a rainbow as the bright colors pop in every scene. This is a movie meant to be enjoyed for its visuals.

While this isn’t out yet, we’re including it on the list because it’s a Philippine production. The live-action adaptation of Voltes V is a GMA production that is currently filming. While we don’t know much about the plot, we do know who will be acting in the series. Mark Gordon, Matt Lozano, Raphael Landicho, Miguel Tanfelix, Ysabel Ortega are all set to play the main cast of heroes. Martin del Rosario will play series villain Prince Zardoz, Liezel Lopez will play his right hand, Zandra, while Epy Quizon and Carlo Gonzales will play Zuhl and Draco respectively. Voltes V: Legacy has also teased their set and some props. Fingers crossed this one is good.

Continue Reading: Genshin Impact: Reasons Why You Should And Shouldn’t Get Into It