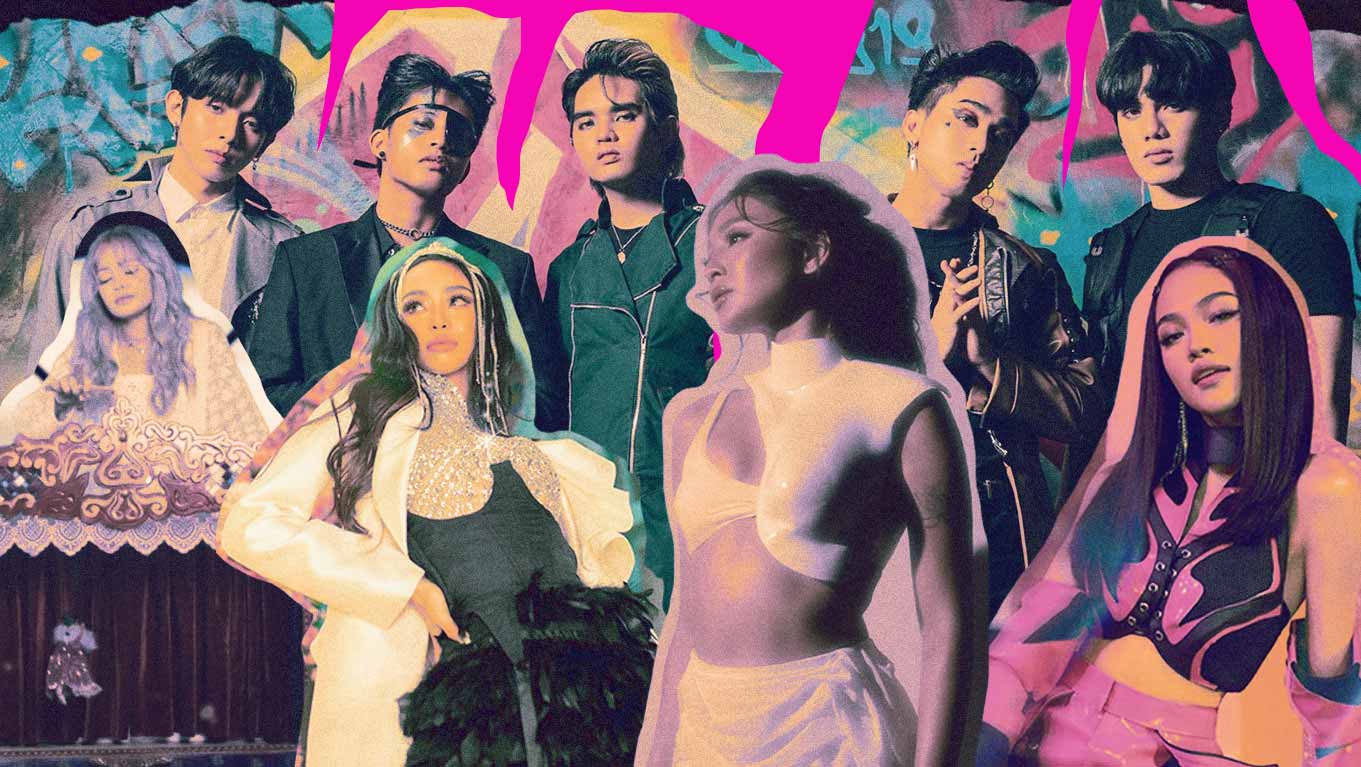 Yo, Can We Talk About The Fashion Moments Of These Fresh Music Video Releases?

From KZ Tandingan, SB19, Nadine Lustre, and a whole lot more, these Filipino artists are really stepping up their fashion and music video game, one song at a time.

As generations raised on the saturation of colors, hypnotic hyperrealism, and imagination of MTV and YouTube, the premium of a music video has become of great importance to an artist and the music. These visual narratives are not only exciting extensions of a song, but as it brings to life rhythm and lyrics into a concise and comprehensible creative, it is essential to its lifeline and scope. Now, it goes without saying that if you want your music to go places, a music video will help you get there, or perhaps even further than you intended. Sure, nothing will come close to the ability of music to affect, but its impact is exponentially multiplied when the lights, cameras, and actions are part of the equation.

However, just like the many greats, such as David Bowie, Michael Jackson, Madonna, Spice Girls, Britney Spears, Lady Gaga, and Rihanna, who pushed the medium of music videos beyond its boundaries, they dusted their cinematic efforts with the razzle and dazzle of fashion. Here, the added layer of thought and style took things from standard to, well, stellar. From the moon man outfit of David Bowie, the leather jacket of Michael Jackson, and the vinyl catsuit of Britney Spears, the power of fashion in the context of music and its videos cannot be downplayed. Sometimes, it is so good, so out there, and so brilliant that it supersedes the song.

The Song, The Style, The Story

Over the course of our pandemic-challenged circumstance, the premium of the music video has been elevated, especially in the absence, moderation, and limits of entertainment. Where live concerts and festivals, veritably cash cows for the music industry, have taken a devastating hit, artists had to peddle their music by way of the internet. And while digital versions of performances continue to tide us over in evident uncertainty, singers funneled a sizable chunk of their energy into producing immersive experiences for the audience to enjoy. With a great lot turning to music videos, this meant leaning in on the fashion to make it as tactile as possible. Where we jammed to the music, we also paid close attention to what the singers were wearing.

Locally, there was no shortage of statement-making fashion in music videos. We have James Reid in the range of looks he explored in his recent releases, SB19 with their cleverly coordinated ensembles, and of course, this conversation isn’t complete without mention of Nadine Lustre. In her creative catharsis and magnum opus, the Wildest Dreams visual album, the sensorial style was so central to the storytelling that its exuberance and extremism was really a game-changer for the Filipino audience.

From this point on, artists will find more creative and compelling ways for their expressions. Whether it be the evolution of filmmaking, the emancipation of art from tradition, or the entanglement of fashion and music in video, there will be a lot to look out for. Things aren’t what they used to be anymore, and you know what, that’s okay. So, when the next music video comes out, trust that aside from being critical about the cinematic approach, our eyes will be on the lookout for the fashion. Lady Gaga taught us right after all: “Walk, walk, fashion, baby.”

Within a few weeks, these Filipino artists have released new music videos for us to enjoy. While the music is well and good, we are paying close attention to the fashion that they turned out. What were your favorites?

True to the buoyant orchestration and bold lyricism of Bazinga, which obviously borrows heavily from video games, the fashion in the music video displayed that very well. From the predominant utilitarian looks that made for a tough yet sensible armor all throughout, the looks seemingly inspired by Mortal Kombat and Avatar really stood out. Realized in the coordinated colors of the Fire Nation in deep red and black, the hybrid of roomy and exaggerated silhouettes that really made this a total K.O.

While the theatrical concept rendered in mixed mediums of Janine Berdin’s Pagod Na Ako is a feast for the eyes, the fashion in the music video was not left behind. Lifted from the velvet drapes and puppets in the background, pastels in various textures were an ironic choice, but if you listen closely to the peppy music and surprisingly sad lyrics, it makes perfect sense. Here, the light blue houndstooth cardigan paired well with her hair, making for a most relatable style turn.

While KZ Tandingan is known for really going above and beyond when it comes to her fashion choices, she also knows when to simplify when and where it matters. In her newest single, 11:59, the musical prodigy dials things down to match the tone and overarching mood of the aching ballad. Keeping things austere in a coordinated beige utilitarian set with oversized pockets and collar, the focus of the dimly lit music video was squared on the exasperated emotion and heaps of heart that fuelled the entire poignant narrative.

Making a strong case for her barely explored facet as a singer, AC Bonifacio swings hard in the release of her single, Fool No Mo! Gleaming and glossy, the music video is a cross between the elements of K-pop and sensibilities of the Gen Z, which makes for an optical overload that is engaging to watch. From the wash of pink over imagined architecture to the illustrations, the fashion emerges in the music video as an equal to everything else. There is the neon and lime number, the pink vinyl chaps combo, the iridescent cropped jacket and trousers pairing, all of which were a sight to behold, but the star? The denim corset cinched over a tattoo-printed top mixed with a shimmery skirt and finished off with disco ball boots. Clearly, AC Bonifacio isn’t fooling around.

While relatively newcomers to the thriving P-pop expanse, Alamat is already carving out a name for themselves. Firmly rooted in the rich and vibrant culture of the Philippines, the eight-member boy group has also been slaying and stomping it out in style. Incorporating Filipino textiles, silhouettes, and stories in their looks, Alamat is a sight to behold. Following kasmala and kbye, Taneo, Mo, Jao, Tomas, R-Ji, Valfer, Gami, and Alas display a diverse and unique sense of fashion in the music video for porque. With multiple striking changes, such as black and white neo-romantic, pastels, and traditional Filipino ensembles (salakot and all), the opening look was the most breathtaking in its exercise of restraint, honoring the codes of tailoring with the stitching of Philippine fabrics to make it, well, legendary.

If you haven’t heard of Maymay Entrata’s insanely addictive ditty, Amakabogera, what rock have you been living under? The pop track is intense, but it doesn’t take away from the young star’s clear and crisp vocal that cuts through the production. Powerful as it is, the fashion in the accompanying music video takes the single to soaring heights. A contrast to overarching electric energy, the high fashion looks elevated the experience with its mix of details, textures, and shapes. From the black sparkling and sheer abdomen baring number to the red ensemble meant to mimic a fiery red flower, it was the shining, shimmering, and splendid look that really had us wagging our fingers and shouting: kabog!

Nadine Lustre – Wait For Me

When it comes to visuals, Nadine Lustre never disappoints. If the Wildest Dreams visual album took us to a surreal, otherworldly trip beyond the comprehension of our senses, her tendering telling of letting go in Wait For Me takes us back to reality. Baring her heart and soul in the vocal revelation, Nadine Lustre invites us into this cinematic undertaking in an assemblage of looks that mimic the stages of moving on. From the delicately ruched white look, the sensual black top, the visceral acrylic top meant to mimic a sense awakening splash of water, and the body-contoured breastplate and flared trousers in immaculate white, the transition was effortless and evocative. Whatever she does and wherever she will go, let it be known, we are willing to wait, Miss Nadine.

CONTINUE READING: IN THE VISUAL TELLING OF WILDEST DREAMS, NADINE LUSTRE DEMYSTIFIES HER WHAT ONCE WAS, REALIZING WHO SHE REALLY IS